The two teams contested two extremely tight games last season with a 2-2 draw at Keys Park in October followed by a 1-1 draw at Redditch in February. The Pitmen took the lead three times over those two games with Redditch equalising each time. Hednesford ended the season in 9th place, six places above Redditch in 15th having achieved nine points more across the 40 game season.
In an exciting twist Redditch arrive here at the Race Stadium with Hednesford’s top scorer from  last season in their squad as midfielder Reece Flanagan scored ten goals for us, nine in the league of which two of those were penalties. Also in the Redditch squad is his brother Calum Flanagan who was here at Hednesford under manager Liam McDonald and departed for Solihull along with McDonald in December 2016, and midfielder Aram Soleman who had a short spell with us at the beginning of last season but who is likely to miss the game through injury. A player we will not be seeing is former Pitman Dan Sweeney who top scored for Redditch last season but has moved to Bromsgrove over the summer. Other players to have left Redditch since the end of last season are midfielder Luke Rowe (Hednesford), utility player Ryan Edmunds (Bromsgrove), Dennis Digie and Victor Sodeinde.

Redditch have signed seven new players during the summer with attacker Dan Gyasi arriving from Stourbridge, striker Bernard Mensah arriving from Gloucester City (although he was on loan to Redditch during last season), attacking midfielder Cam Moore coming in from Loughborough University, and Ukrainian full-back Yan Osadchyi, who was playing for Alians Lypova Dolyna in the Ukrainian second tier last season until he had to flee the war to settle in Worcester. The striking department has also been bolstered by the signings of Ryan Nesbitt, who scored 22 goals for three different clubs last season and Dylan Hart, who scored 26 goals for Bewdley Town and Lye Town last season.

Redditch have had an impressive pre-season campaign with four wins and three draws from their seven games with wins at home to Cradley Town (6-1) and Studley (3-0) as well as away wins at Rugby Town (2-0) and AFC Blackpool (3-1). Their last two games ended in 1-1 draws away at Evesham United and at home to Worcester City and there was also a 3-3 draw at Pershore Town earlier in the campaign. The friendlies have produced some good performances but the team has also suffered with injuries and the failure to take far more of the chances they created to score more goals. The club also did excellent work during pre-season when they raised over £2,500 for mental health charity Kaleidoscope Plus from the Tom Rankin memorial game in July.

Redditch’s first month of the campaign includes home games against King’s Langley, Stratford Town and Nuneaton Borough along with away trips to Ilkeston Town and Stourbridge.

Redditch are managed by Matt Clarke, who has been in charge since September 2020 and who had an excellent playing career, as a youngster with Wolves and WBA and then with Kidderminster Harriers, Hereford United, AFC Telford United as well as Redditch before becoming manager. He also strengthened his coaching team with goalkeeper coach Dan Price and UEFA A licence coach Ryan Conneely coming in, and in a recent interview Matt Clarke said this will be “a very tough game against a very good team with lofty ambitions of being a play-off contender.” 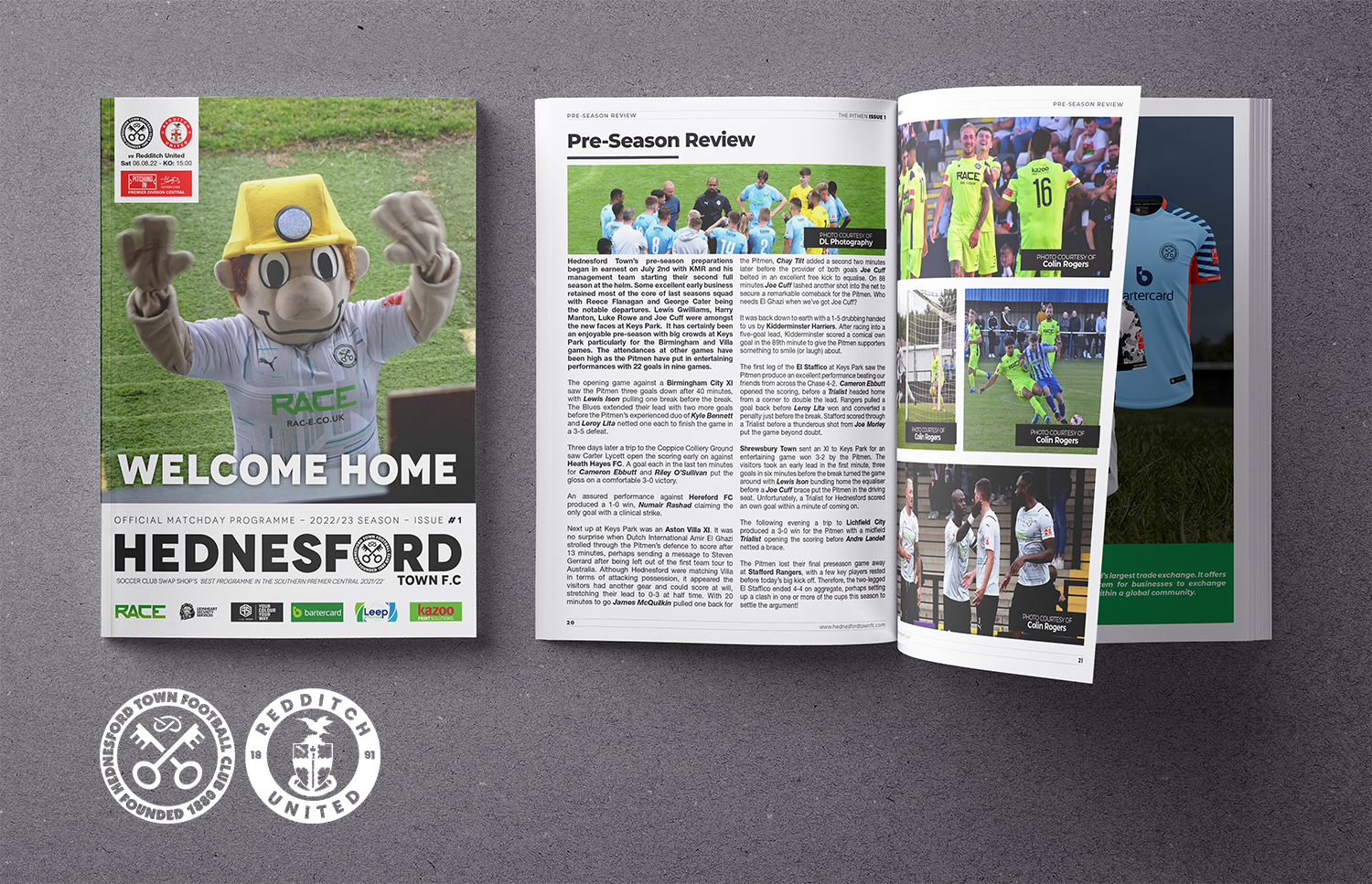 After being voted the best in the Southern Premier Central Division and ninth best in all of non-league football by Soccer Club Swap Shop last season, our matchday programme is back.

Issue 1 of 2022/23 looks back at the Pitmen’s pre-season campaign, introduces you to the new signings and academy graduates to the first team as well as some new interactive features for the new season.

Be sure to pick up your copy at the RACE Stadium tomorrow.